To tell you the truth, when I first heard about Kiefer’s Cafe, I wasn’t excited. Another souffle pancake shop? I thought. Shiawase no Pancake down in Sendai was already bad enough, I didn’t need more popular pancakes shops in Akita.

The first time I tried to go to Kiefer’s, my friend had spotted the shop in Mari Mari, the local women’s lifestyle newspaper. I thought, well, sure, why not try another cafe? It’s not my top choice, but I do love cafes.

Sadly, with only 5 parking spots and a long wait, we weren’t getting there.

On this fateful Wednesday, however, I was able to snag a table. Mostly because I was the first one in line, since I came 30 minutes early.

The base price for the pancakes are actually quite decent. They start at 790 yen for either the French, French Brulee, or Kiefer’s pancakes. I suspect they mean French as in french toast, and that the French Brulee is just french toast pancakes with scorched sugar on top.

Although I was interested in the french brulee choice, I instead went with the simple Kiefer set, with a medium sized pile of whipped cream and nuts, and syrup on the side.

AND BOY, WAS IT EVER GOOD.

Now, I’ve been to Shiawase no Pancake, which is considered one of the top souffle pancakes in the country, always featured in magazines and on television – especially for their use of manuka honey and their fluffy texture. But the one time I went in Sendai, I absolutely hated their pancakes! The wait time in line, plus the weirdly salty tang of the dish…It just wasn’t a dessert. Or a treat.

But Kiefer’s…now they do it right! The pancakes were delicious, fluffy, and slightly sweetened. It still need the syrup, but it wasn’t off putting. It’s a place I would go to again, even though the selection is small.

Kiefer’s is located in Tegata, near Akita University and is open weekends and weekdays from 11 – 5:30. Tuesday is their day off. 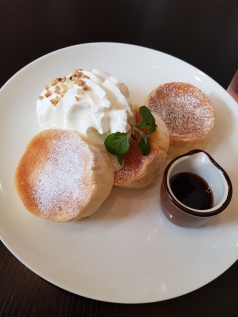